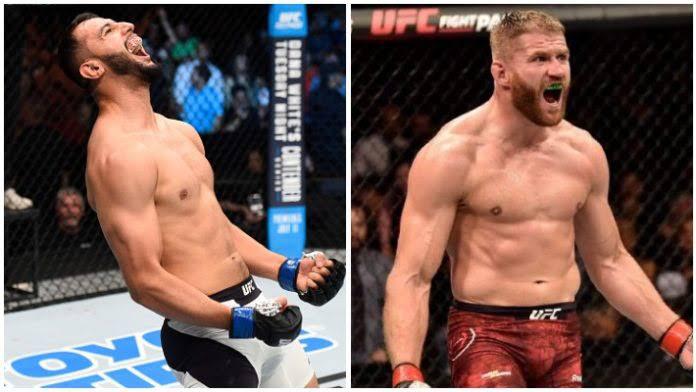 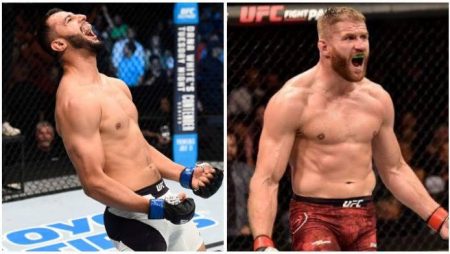 After Jon Jones decided to vacate his Light Heavyweight title on August 18, 2020, and move up to the Heavyweight division, it’s time for a new champion to claim his throne. The number one contender Dominick Reyes will take another shot at the Light Heavyweight title after his very close loss by decision against Jon Jones last February 8, 2020. Many people, including myself, believe he could have won that fight. This time he will face the number three contender Jan Blachowicz in the cage. Blachowicz is known as one of the toughest guys in the division and he’s been waiting a long time for his shot at the title. Let’s have a look at both fighters and see who I believe will become the new Light Heavyweight champion.

I have to admit, Dominick “The Devastator” Reyes is one of my favorite Light Heavyweight contenders, if not my favorite. When he steps in the octagon, you just know we’re in for a show. I’ve never seen a fighter before who combines explosive knockout power with technique, speed and mobility like Reyes. As he proved in his last title fight against Jon Jones, when he fights he goes all out, till the very end. This guy is nearly impossible to knock out, has incredible cardio for a Light Heavyweight and just keeps on throwing whatever he has at you, no matter if it’s in the first or the fifth round.

Reyes is a former American Football player and wrestler, who began training MMA at his brother’s gym in 2013. He won his professional MMA debut against Jose Rivas Jr. on December 4, 2014, by TKO in the first round. After that he won five more fights, of which 4 by stoppage in the first round – 3 KO’s and 1 submission – and 1 by unanimous decision. Finally he made his UFC debut against Joachim Christensen on June 25, 2017, which he won again by TKO after only 29 seconds in the very first round. His next two fights he won as well by stoppage in the first round, against Jeremy Kimball by submission on December 2, 2017, and Jared Cannonier by TKO on May 19 2018. After that he defeated Ovince St. Preux on October 6, 2018, and Volkan Oezdemir on March 16, 2019, both by decision. His last victim was Chris Weidman on October 18, 2019, who he defeated in the first round by KO. And then came his title fight against Jon Jones on February 8, 2020, where he suffered the first loss in his career, by decision. Nobody had ever put up a fight against Jones before like Reyes did that night. Jones’ compliments to Reyes after the decision fell, prove how close this fight actually was. It could have gone both ways. So if anyone deserves another shot at the title, it’s Dominick Reyes.

Jan “Prince of Cieszyn” Blachowicz is one of the hardest guys in the Light Heavyweight division. On his first tournament for KSW in 2007 he defeated three opponents in one night. By now he is a UFC veteran who’s been around since 2014 and since then he won nine of his fourteen UFC fights, four by KO/TKO, two by submission and three by decision.

He lost his MMA debut by decision on February 25, 2007, against Marcin Krysztoflak. After that he came back hard on his KSW debut tournament, defeating Sebastian Olchawa by decision and Pawel Gasinski and Daniel Dowda by TKO on September 15, 2007. Later he would win fourteen out of sixteen fights, before signing up with the UFC in January 2014. On October 4, 2014 he then won his UFC debut against Ilir Latifi by TKO in the first round. After two losses against Jimi Manuwa and Corey Anderson,both by decision, he defeated Igor Pokrajac on April 10, 2016, also by decision. After again two losses by decision against Alexander Gustafsson and Patrick Cummins, he won against Devin Clark by submission on October 21, 2017. Later on he defeated Jared Cannonier and Jimi Manuwa by decision, and Nikita Krylov by submission. On February 23, 2019 he suffered his last loss against Thiago Santos by TKO in the third round. He is currently on a three-wins winning streak after victories against Luke Rockhold by KO on July 6, 2019, Ronaldo Souza by decision on November 16, 2019, and Corey Anderson by KO in the first round on February 15, 2020, earning himself a shot at the title.

I believe this fight will be a full-on brawl. Dominick Reyes will put the pressure on Jan Blachowicz. He will keep striking, pushing Blachowicz to the outside of the cage, and by doing so keep scoring points. We can expect a spectacular fight, however I don’t believe this bout will be won by a stoppage. Although both fighters possess the knockout power to put their opponent to sleep, both of them have the chin as well to eat those kicks and punches. Therefore I think this fight will go the distance, and Reyes will win by decision.