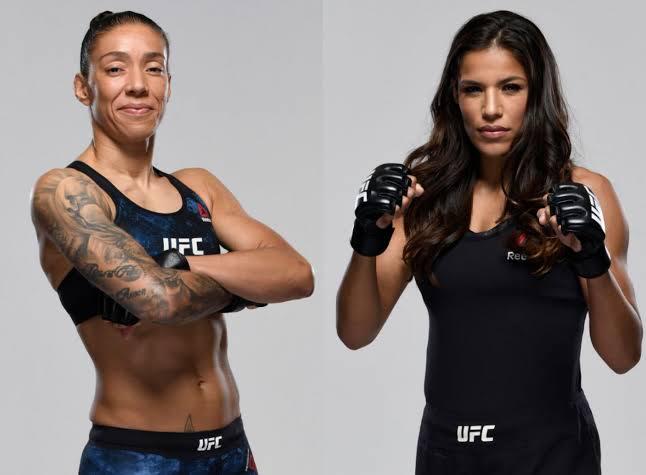 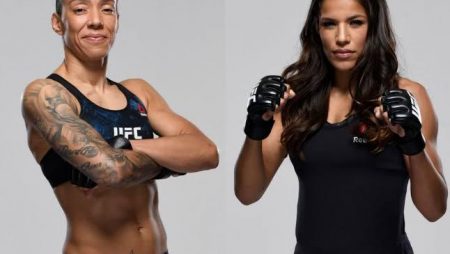 I’m always excited to see Germaine de Randamie fight. She’s one of the most dangerous strikers in the division. A pure Muay Thai style kickboxer with lethal striking power and accuracy, especially dangerous in the clinches. Her only true weakness is her grappling, which is exactly the strength of her opponent, Julianna Peña. Let’s have a look at the fighters and who I believe will win this bout.

Germain “The Iron Lady” de Randamie is currently the number 1 ranked contender in the women’s Bantamweight division. She is very dangerous at every range on her feet, especially in the clinch, where she uses her forearms to frame off from her opponent which allows room for big knees to the body and head along with powerfully generated elbows. If she can keep the fight off the ground, avoiding takedowns, she’s almost unbeatable.

Germaine is a former kickboxer with an impressive professional kickboxing record of  46 wins over 0 losses, of which 30 by KO. She made the switch to MMA in 2008, with her debut on December 19, 2008, against Vanessa Porto. She lost this fight by submission in the first round. Her next two bouts were more successful, defeating Nikohl Johnson in September 2010 by decision, and Stephanie Webber by KO in the first round in  January 2011. After losing by decision against Julia Budd in June 2011, she defeated Hiroko Yamanaka on August 18, 2012, also by decision. Then on July 27, 2013, she made her UFC debut against Julie Kedzie, defeating her split decision. On November 6, 2013, she faced Amanda Nunes for the first time, a bout she lost by TKO in the very first round. After this defeat, she recovered herself and started a five fights winning streak. First she defeated Larissa Pacheco in March 2015 by TKO in the second round, then she took out Anna Elmose in May 2016 by KO in the first round. On February 11, 2017, she defeated Holly Holm by decision in a controversial championship bout – de Randamie continued throwing punches after the horn blew at the end of the second and third round and remained unpunished – for the Featherweight title. However on June 19, 2017 she was stripped of her title because she refused a fight against Cris Cyborg. She then took on Raquel Pennington in November 2018, defeating her by decision. On July 13, 2019, she defeated Aspen Ladd by TKO after only 16 seconds in the first round. Finally on December 14, 2019, she faced Amanda Nunes for the second time. De Randamie lost this bout by unanimous decision. However it’s fair to say she went down like a warrior, since critics consider this fight probably the hardest fight in Nunes’ career so far.

Julianna “The Venezuelan Vixen” Peña is currently the number 4 ranked contender in the women’s Bantamweight division. She was the first woman ever to win The Ultimate Fighter on November 30, 2013. She’s a very descent grappler,  who’s very difficult to shake off once she’s on top of her opponent. She’s also an aggressive striker, however her strikes are not very technical, but more to be seen as a way to close the distance while she looks for the takedown.

Peña won her professional MMA debut on May 9, 2009, when she defeated Raylene Harvey by submission in the first round. After three more wins – against Robyn Dunne in August 2009 by TKO, Stephanie Webber in December 2009 by submission and Rachael Swatez in December 2011 by submission – she suffered her first loss against Sarah Moras on April 19, 2012, by TKO in the second round. Her next fight, against DeAnna Bennett on Februari 8, 2013, she lost as well by decision. She made her UFC debut with a successful campaign in The Ultimate Fighter 18, where she fought for team Rousey. She won the finals against Jessica Rakoczy on November 30, 2013, by TKO in the final seconds of the first round. After suffering a knee injury which kept her out of action during 2014, she returned to the octagon to face Milana Dudieva on April 4, 2015. She won the fight via TKO in the first round. Later she defeated Jessica Eye in October 2015 and Cat Zingano in July 2016, both by unanimous decision. On January 28, 2017 she lost her bout against Valentina Shevchenko by submission in the second round. In her most recent fight, she defeated Nicco Montano on July 13, 2019, by unanimous decision.

If Peña wants to win the fight, her only option will be trying to take down de Randamie and try to submit her, or score points by dominating her on the ground. But her takedowns are mostly generated from clinch positions, and since de Randamie is at her best in the clinch positions, I believe Peña’s chances are not looking too promising. Germain de Randamie will win this fight, probably by KO/TKO in the second round.

Betting Tips
Serie A predictions: Can Sassuolo take the lead in the Serie A?
4 months ago
0 171