UFC Predictions – Fight Island 5 Moraes vs Sandhagen: Who will earn the title shot? 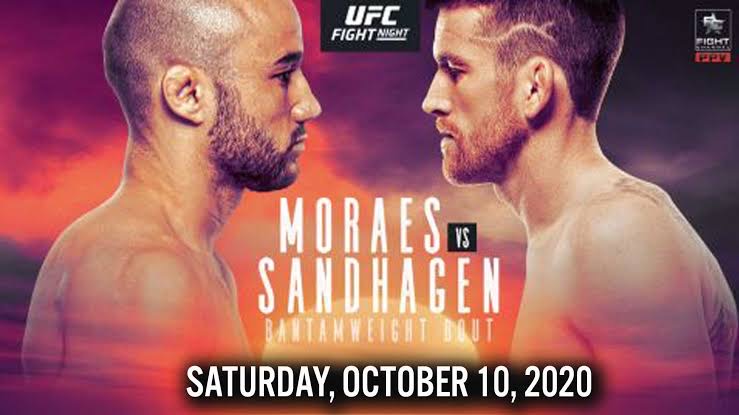 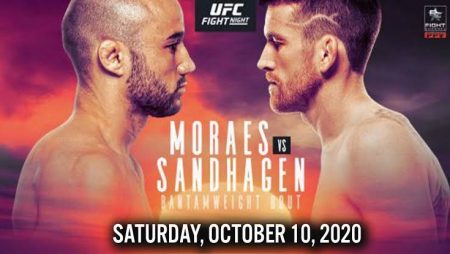 We have another exciting night ahead of us this Saturday, October 10. Fight Island continues with its fifth edition staged at Yas Island in Abu Dhabi. Especially for the main event, there’s a lot at stake. Marlon Moraes will take on Cory Sandhagen. The winner of this fight will possibly be the next in line to challenge Petr Yan for the Bantamweight title. But there are many other reasons to look forward to this event. Today we will go deeper into the main event, and I’ll share with you my picks for this week.

Marlon “Magic” Moraes is currently the number 1 contender in the Bantamweight division. He’s coming off a decision win over Jose Aldo at UFC 245 last December. He lost his UFC debut via split decision against Raphael Assuncao in 2017 but has since then gone 5-1. That includes a revenge win against Assuncao and wins against Aljamain Sterling and Jimmie Rivera. The loss came by TKO late in the third round against Henry Cejudo.

He is an explosive striker with a background in Muay Thai and a black belt in Brazilian Jiu-Jitsu. This makes him very dangerous on his feet and on the ground. 10 out of his 23 wins came by KO/TKO and 6 by submission.

Cory Sandhagen is the number 4 contender in the Bantamweight rankings. He is coming off a first-round submission loss against Aljamain Sterling at UFC 250 last June. Prior to that defeat, he was on a seven-fight win streak, including decision wins against Raphael Assuncao and John Lineker. The other five wins were finishes, of which four by TKO.

Sandhagen is a tall, high-volume striker that lands 6.95 significant strikes per minute while absorbing 4.08. He combines kickboxing with grappling. He’s the type of fighter that keeps striking, looking for a KO, and by doing so, scoring points. But he’s also not afraid to take it to the ground. He will try to get on top of his opponent, looking for the ground and pound.

Tips And Winnings for this event?

Let’s see who wins this UFC fight tonight. Both Moraes and Sandhagen have a decent background in kickboxing and Muay Thai. Meaning this fight will probably be decided standing up. However looking at both fighter’s records, a submission might be possible too.

Moraes will put the pressure on Sandhagen in the first and maybe the second round. He will come out explosive. However, I don’t expect he will overrun Sandhagen, who will use his three-inch reach advantage over Moraes. Combined with clean strikes and his outstanding footwork, he will withstand the pressure coming from Moraes in the opening rounds. Then it will come down to conditioning. Despite being extremely active with high output, Sandhagen has more than decent cardio. Moraes on the other hand is known to get gassed after pushing the action early. Sandhagen will switch stances and maintain distance early in the fight. Then he will start breaking down a tired Moraes in the later rounds. My bet for this main event will be Sandhagen to win the fight.

Win Ulanbekov in round 3 or decision – Yes