UFC Predictions – UFC 254 Khabib vs Gaethje – Can Khabib be beaten? 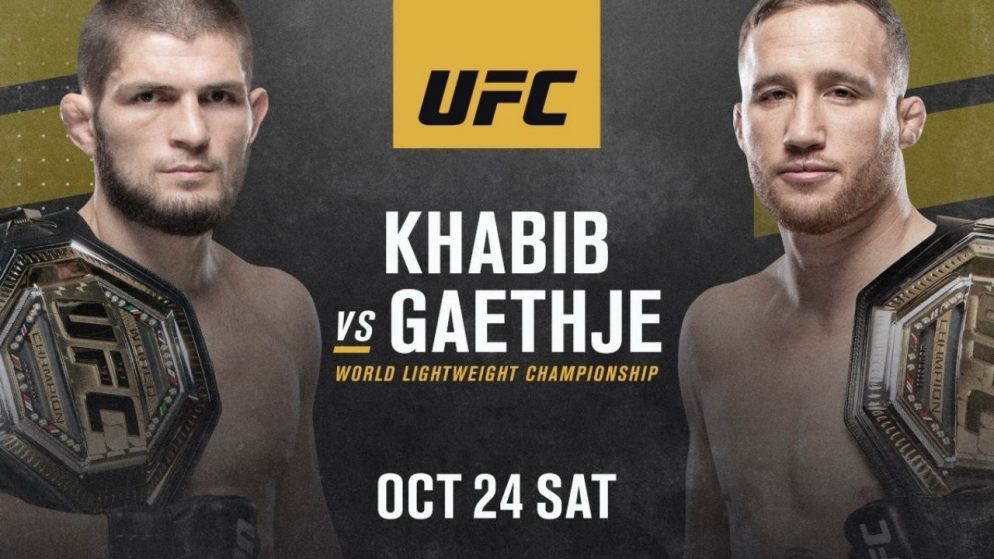 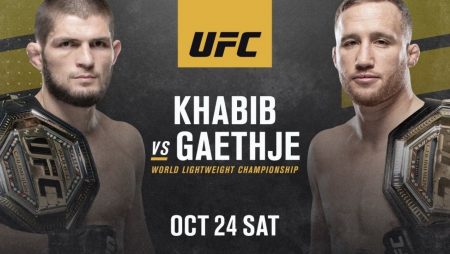 Just when you think the cards couldn’t get any better, we get this line up on Saturday, October 24. Khabib Nurmagomedov will defend his Lightweight title against Justin Gaethje in the main event. A matchup made in heaven for many. In the co-main event, Robert Whittaker will take on Jared Cannonier. And if that wasn’t enough to convince you yet, Alexander Volkov will face Walt Harris in the octagon. We will go deeper into the main event. and give you some insights on some of the other bouts on this card.

Khabib “The Eagle” Nurmagomedov is currently the reigning Champion in the UFC Lightweight division. He started practicing martial arts at the age of eight. Under the tutelage of his father, he mastered the skills of wrestling, judo, and combat sambo. Later he switched to MMA, with his professional debut in September 2008. Three years later, with a professional record of 16 wins and 0 losses, he was offered a UFC contract.

In his UFC debut on January 20, 2012, he defeated Kamal Shalorus by submission in the third round. He won his second bout, against Gleison Tibau in July 2012, by unanimous decision. Later he would defeat Thiago Tavares with a first-round KO, followed by unanimous decision wins against Abel Trujillo, Pat Healy, and Rafael Dos Anjos. In April 2016, he won against Darell Horcher by a second-round TKO. After beating Michael Johnson by submission and Edson Barboza by decision, he finally earned his shot for the Lightweight title. Khabib won his title fight against Al Iaquinta by unanimous decision on April 7, 2018, becoming the new UFC Lightweight Champion. He would successfully defend his title twice, against Conor McGregor in October 2018, and Dustin Poirier in September 2019.

With 28 wins and no losses, Khabib holds the longest active undefeated streak in MMA. Ten of his wins came by submission, ten by decision, and eight by KO/TKO. It’s fair to say until today nobody really has had an answer for Khabib in the octagon. He has tremendous wrestling skills. He will look for the takedown, and once he has you on the ground, it’s almost impossible to get out. Khabib can keep ground control as we’ve never seen before in the UFC, making every opponent feel helpless. On top of that, he’s a very powerful striker. He knocked down McGregor and made it look easy. Although his main strength is considered to be his grappling, Khabib is an all-round fighter, who’s extremely dangerous at any level.

Justin “The Highlight” Gaethje, began wrestling when he was four years old. He used to be the fifth-ranked wrestler in the All American NCAA division. While in college, he began practicing MMA. He turned professional in 2011, knocking out Kevin Croom at his debut on August 20. In May 2017, with a professional record of 17 wins and no losses, he was offered a UFC contract.

On his UFC debut on July 7, 2017, he defeated Michael Johnson by TKO in the second round. He then lost against Eddie Alvarez by KO in December 2017 and against Dustin Poirier by TKO in April 2018. After those two losses, he managed to recompose himself. In August 2018, he defeated James Vick by a first-round KO. His next two opponents would suffer the same fate. In March 2019 he won against Edson Barboza by KO after 2:30 minutes in the first round. Donald Cerrone was defeated by TKO in September 2019, also in the first round.

Which brings us to his most recent fight. On May 9, 2020, Gaethje took on Tony Ferguson. It turned out to be one of the most phenomenal fights in UFC history. Gaethje won the fight by TKO, but it’s a miracle the fight lasted as long as it did. Ferguson kept on eating one power shot after another, refusing to go down. Finally, Judge Herb Dean stopped the fight after 3:39 minutes in the fifth round. After this performance of a lifetime, Gaethje finally earned the right to take a shot at the Lightweight title.

Justin Gaethje is a fierce striker with extreme knockout power, always pushing forward. He usually starts working on the lower body to distract his opponent. Then when he sees an opening, he drops that lethal right hook that can put anybody to sleep. He’s a full-on brawler, that loves to keep the fight standing.

Looking at his fighting style, you would almost forget he’s also a great wrestler. He states that he prefers not to wrestle because it tires him too much. But he uses his wrestling skills more than you think. He may not use them as offense as he did before, but he definitely uses them for defense. The way he moves and positions himself makes it almost impossible to take him down. As a matter of fact, he’s only been taken down twice in his seven UFC fights. Once by Michael Johnson and once by Eddie Alvarez, which explains his 80% takedown defense record.

Who will go home with the belt tonight?

We know Gaethje has amazing knockout power and is also a great wrestler. That’s why many believe this to be the perfect matchup for Khabib. He might even be the first one to finally defeat “The Eagle” from Dagestan.

Khabib however, is nothing like Gaethje has ever seen before. He is so dominant on the ground, I don’t think Gaethje’s background will be sufficient to cope with Khabib. Khabib is very familiar with wrestling and grappling. He uses it daily, in the gym and in his fights. On top of that, he’s also an extremely strong and dangerous striker who can take a punch as well. The recent loss of his father, last July, will give him even more motivation to win.

We’ve seen it before with high-power strikers like McGregor and Poirier. They upscale their takedown defense and grappling. Then they step in the octagon, trying to keep it on the feet and knock Khabib out. Or try to break free once Khabib’s on top of them. But they fail both ways. I just don’t see why it would be different this time. That’s why I believe Khabib will win. Gaethje will realize that it’s not so easy to knock out Khabib. Khabib on his part will manage to take Gaethje down. He will keep him down, apply constant pressure, and tire him, round after round.

Probably in the fourth or fifth round, Khabib will finish Gaethje, or win by decision.

Win Volkov in Round 3 or by Decision