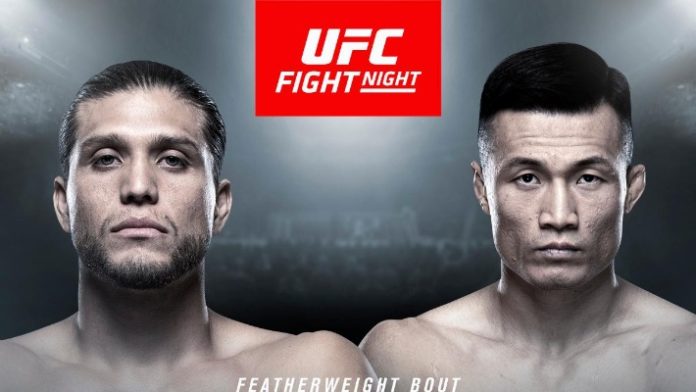 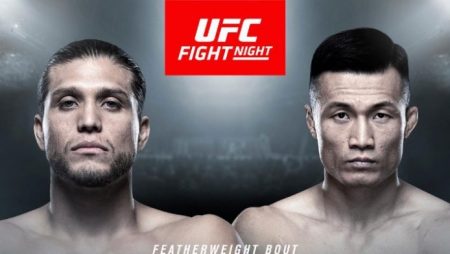 UFC Fight Island returns for the sixth edition out of Abu Dhabi’s Yas Island, next Saturday, October 17. In the main event, one of my favorite Featherweight contenders, The Korean Zombie, will take on Brian Ortega. And there’s a lot at stake here. Max Holloway, currently still the number 1 ranked Featherweight contender, lost his rematch against the reigning Featherweight champion Alexander Volkanovski. So the winner of this main event could possibly earn himself a spot in the next title fight. Also after the slapping incident between Ortega and Zombie’s translator last March, we might see some fireworks in the octagon.

The originally planned co-main event, Gane vs Delija, is canceled due to Delija’s contractual obligations with the PFL. Therefore the women’s Flyweight bout between Katlyn Chookagian and Jéssica Andrade will now feature as the co-main event. Further, on the main card, Jimmy Crute will fight against Modestas Bukauskas. Claudio Silva will face James Krause and finally, Thomas Almeida will get it on against Jonathan Martinez.

I will go deeper into the main event. Then later on I will share my interesting picks on some of the other fights on the main card.

Brian “T-City” Ortega started practicing Muay Thai when he was five years old. At the age of thirteen, he began training Brazilian Jiu-Jitsu at the Gracie Jiu-Jitsu Academy. He is an all-around fighter, however, his greatest strength is his grappling, which shows on his record. Seven of his fourteen wins came by submission and only three by KO/TKO. The other four victories came by decision.

Ortega made his professional MMA-debut against John Sassone on April 25, 2010. He won this bout by submission in the first round. In April 2014, he was signed by the UFC after compiling an undefeated 8 – 0 record. He won his UFC debut against Mike de la Torre by a first-round submission on July 26, 2014. This result was later overturned to a No Contest after Ortega tested positive for Drostanolone during a post-fight screening. This also cost him a nine-month suspension.

On his UFC return on June 6, 2015, he defeated Thiago Tavares by TKO in the third round. In January 2016, he won against Diego Brandao by submission. His next opponent, Clay Guida, was defeated by a third-round KO in June 2016. Then, in July 2017, he defeated Renato Carneiro by third-round submission. In December 2017, he faced Cub Swanson, defeating him by submission in the second round. On March 3, 2018, he won against Frankie Edgar with an impressive first-round KO. In his last fight, against Max Holloway on December 8, 2018, he lost by TKO by doctor stoppage after round four.

Ortega is currently the number two-ranked contender in the Featherweight division, after Max Holloway.

Chan Sung “The Korean Zombie” Jung began training Hapkido at the age of fourteen. Later on, he started practicing Kickboxing, Judo, Brazilian Ji-Jitsu, and Taekwondo. At the age of 20, he began practicing MMA, to make his professional debut soon after. His nickname comes from his zombie-like ability to keep moving forward and fight aggressively, even after taking heavy blows. He’s also an all-around fighter. Eight of his sixteen wins came by submission, six by KO/TKO, and two by decision.

The Korean Zombie made his professional MMA-debut on June 24, 2007. He won this bout against Hyung Geol Lee by submission in the second round. On March 26, 2011, with a professional record of ten wins and three losses, he made his UFC debut. He defeated Leonard Garcia by second-round submission. In December 2011 he knocked out Mark Hominick after only seven seconds in the very first round. Then on March 15, 2012, he defeated Dustin Poirier by technical submission in the fourth round. In August 2013 he lost against Jose Aldo by TKO in the fourth round.

After two years of military service in the South Korean army, he returned to the UFC in February 2017. He won this fight against Dennis Bermudez by a first-round KO.  In November 2018, he lost against Yair Rodriguez by a phenomenal elbow KO at 4:59 minutes in the fifth round. This brutal back-elbow KO is still one of the most amazing KO’s in UFC history to me. If not the most! In June 2019, The Korean Zombie defeated Renato Carneiro by TKO in the first round. Which brings us to his last fight. On December 21, 2019, he won against Frankie Edgar by TKO in the first round.

The Korean Zombie is extremely dangerous at any level. He is a fierce striker with knockout power, who keeps coming forward, regardless of how many blows he took. He’s also an amazing grappler with excellent takedown defense. He is currently the number four-ranked Featherweight contender.

Ortega is higher ranked and only lost once, but I have to go with the bookies on this one. Ortega mainly wins his fights by grappling. The Korean Zombie, however, has a takedown defense record of 77%. He has never been submitted in his 21-fight MMA career. I also believe that The Korean Zombie is more dangerous and more accurate in the striking department. He also possesses amazing cardio. If The Korean Zombie keeps his neck out of Ortega’s dangerous guillotine, I don’t believe he can lose the fight. He will try to keep the fight standing and keep pushing forward. Ortega will be no match on the feet against The Korean Zombie. The fact that he hasn’t fought a fight in almost two years won’t help him either. I will go on two picks for this bout.

The Korean Zombie will win the fight by KO/TKO.

The Korean Zombie wins in Round 1 – 3

Win Andrade by KO, TKO, DQ or on points