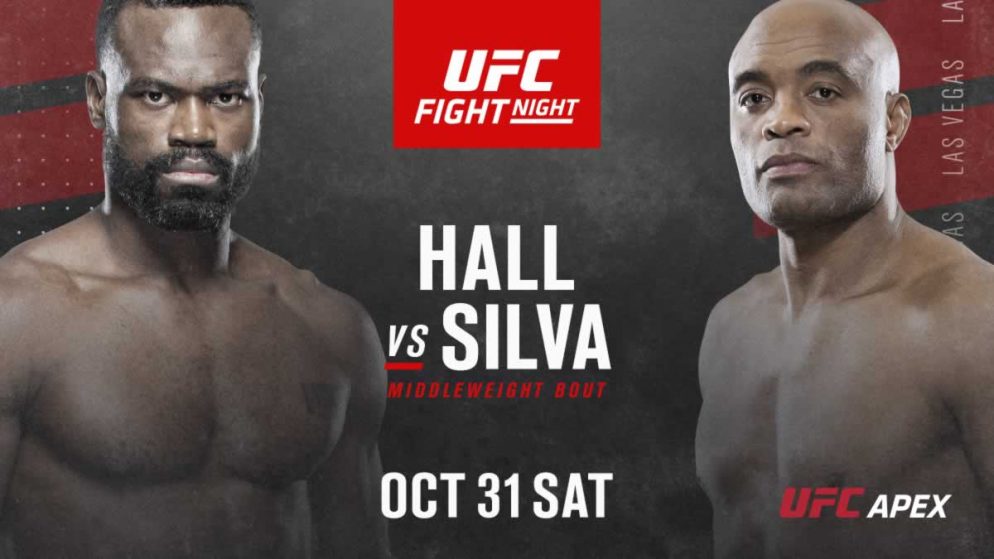 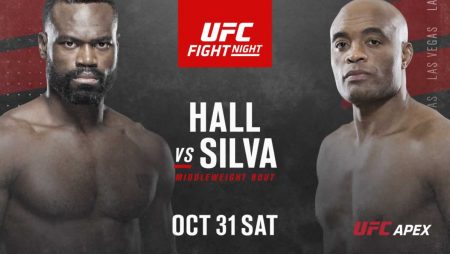 Only one week after Khabib Nurmagomedov threw down the gloves, UFC fans will have to say goodbye to another legend. 45-year-old Anderson Silva announced that this week’s main event bout against Uriah Hall will be his last. Although Anderson’s career has been in a downward spiral since 2013, it’s still yet another great loss for the sport. For the co-main event, Bryce Mitchell will take on Andre Fili. Further down the main card, we have Kevin Holland vs Charlie Ontiveros. Maurice Greene will fight Greg Hardy and Bobby Green will face Thiago Moisés. In other words, the main card is stacked from top to bottom! Here are my picks for the preliminary and main card, but first we’ll go a little deeper into the main event.

Uriah “Primetime” Hall started kickboxing at the age of sixteen. Later on, he switched to MMA, with his professional debut in October 2005. With a professional record of seven wins and two losses, he was selected for the seventeenth season of The Ultimate Fighter. He made it to the final but lost against Kelvin Gastelum by a split decision in April 2013. With his performance, however, he earned himself a ticket for the UFC. He also lost his UFC debut against John Howard by a split decision in August 2013. From then on he had eight wins and five losses. His last loss was against Paulo Costa in July 2018, since then he’s on a two-fight win streak.

Uriah Hall is mainly a striker. Eleven of his fifteen wins came by KO/TKO, only one by submission and three by decision. He doesn’t have the best record, I agree. But lately, he’s been improving, which shows by his current two-fight win streak. He’s currently the number 10 ranked Middleweight contender.

With 2457 days, Anderson “The Spider” Silva still holds the record for the longest-reigning UFC champion ever. He started his professional MMA career in 1997. In April 2006, with a professional record of seventeen wins and four losses, he signed up with the UFC. He made his UFC-debut in June 2006 against Chris Leben. Anderson won by KO after only 49 seconds in the first round. In October 2006, he became the Middleweight Champion after defeating Rich Franklin, also with a first-round KO. From then on he would remain undefeated for fourteen more fights, until 2013. He lost his title to Chris Weidman in July 2013. In December 2013 he lost the rematch as well. Since then his career has been going downhill, with one NC, two losses, one win, and again two losses.

Silva is a fierce striker with a background in Jiu-Jitsu, Taekwondo, Capoeira, and Muay Thai. Twenty-three of his thirty-four wins came by KO/TKO, three by submission, and eight by decision. He hasn’t really been able to pull much off after he lost his title in 2013. Looking at his record, however, he’s still one of the greatest athletes the sport has ever seen. He was undefeated in the UFC for sixteen consecutive fights, successfully defending his title fourteen times. No one can deny how much he contributed to the world of martial arts.  And so we will have to say goodbye to another legend.

Tips and winnings for this fight

Although he had an amazing career, I just don’t see Silva win this bout. Definitely considering the fact that his last fight dates from May 2019. It’s proven that activity is very important, certainly at an older age. Given the big age difference and considerable large reach advantage for Hall, I believe Hall will win. In my opinion, the only way Silva could win is because Hall would let him say goodbye with a victory. But we’re still talking about sports so it’s not likely that will happen. He will attack Silva’s weak spot. Hall will brutally tear down Silva‘s legs and finally win by a TKO. Sadly enough it will not be the most beautiful way to say goodbye to another legend like Anderson Silva. But never the less, his legacy will not be forgotten, whether he wins or loses.

OTHER TIPS AND WINNINGS FOR UFC VEGAS 12 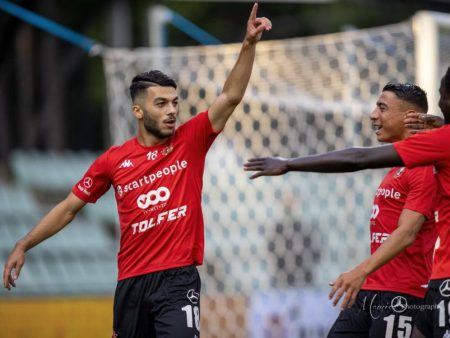 Betting Tips
1B Pro League Prediction: Will history repeat itself when RFC Seraing and Lommel United clash on Sunday?
4 months ago
0 200